skip to main | skip to sidebar

Want to know more about pizza in Chicago?

If you want to know more about Chicago pizza you've come to the right place. This blog will provide tidbits & inside bites about the food Chicago is most known for. Feel free to check back often or better yet, follow us to stay informed about CHICAGO PIZZA.

Anichini, A Legend In Chicago Sausage

The 1986 John Hughes movie FERRIS BUELLER'S DAY OFF starring Matthew Broderick made the name "Abe Froeman - The Sausage King Of Chicago" a household name.  Everyone took that little snippet of the film and made it into their own personal joke.  To think, a high school kid using The Sausage King Of Chicago's name to get a table at an over priced French restaurant (Chez Quis) and doing it successfully just brings a smile to anyone who has ever tried to pull a fast one.

What resonates with that joke though is that Chicago is so well known for being a sausage capital of the world.  It was a perfect fit for a Chicago based movie and probably caused a few people to wonder, was there really an Abe Froeman?  Here is what we know about him courtesy of Sloan Peterson Ferris' girlfriend:

Ok all kidding aside, there is no Abe Froeman (sometimes also spelled Froman) but there have been sausage kings of Chicago.  The original would be Adolph Luetgert a German immigrant who traveled to Chicago in the 1870s to sell sausages.  He set up shop at Hermitage & Diversey in 1894 with his three story house located just next door to his sausage factory.  Success came early to Adolph and he soon married a petite woman named Louisa.  Without getting too much into it Adolph was pulling a "Tiger Woods" and wooing some women on the side.  Louisa, quite the tiny little firecracker would often get into very public fights with Adolph and never held back.  One night Louisa confronted Adolph inside the factory as workers were leaving for the night and the next day she was missing.  Without having to do too much investigative work, the Chicago police determined that Adolph did in fact murder her and probably decomposed her body using stuff in his own factory (acid, meat grinder etc.).
With overwhelming evidence against him, Adolph was convicted and sent to Joliet State Prison where Louisa would get the last laugh.  Adolph would beg and plead with the prison guards that he was being haunted by the ghost of Louisa who, according to his defense was alive and just ran off...  It drove Adolph insane for the rest of his life which was fitting.  Louisa's ghost was also spotted by the factory workers and neighbors of the Luetgerts so she has become famous as one of Chicago's ghosts.
Now, corresponding with the title of this post, Anichini Brothers are the current day sausage kings of Chicago.  Company slogan "Home of the sausage that made Chicago pizza famous" and that is pretty spot on.  Family owned and operated since 1925 located in the River North neighborhood of Chicago, Anichini Bros still to this day dominates the sausage market in Chicago.  It all started when Silvio and his brothers immigrated to Chicago from Lucca which is a small town in the Tuscan region of Italy.  First step for them was to open a grocery store, it was what they knew best. 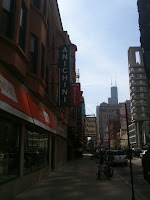 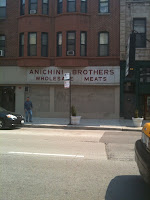 After running the successful grocery store, Silvio's son-in-law Salvatore Gadinni decided to get into the meats and more importantly the sausage making.  They didn't just market their sausages to the consumer, they went right after the big restaurants (namely pizzerias) and why not... they were making the finest "blue ribbon" sausages in the land.
Over the years they have formed great partnerships with some of the cities best pizzerias.  It is no surprise for me at all to find out that Anichini supplies sausage to at least 3 of the 4 stops on my Chicago Pizza Tours company.  For this reason I anoint The Anichini Brothers Company the real Sausage King of Chicago, and give the consumer the inside scoop that if they are eating an awesome sausage pizza at a restaurant in Chicago... chances are it's Anichini's sausage!

Posted by The Chicago Pizza King at 6:29 PM

The Chicago Pizza King
I'm a lifetime resident of Chicagoland who loves pizza. I'm a passionate Chicago pizza connoisseur. This is where I talk about all things pizza and will provide tidbits and inside bites to help my readers get in the know about Chicago Pizza. Check back regularly or better yet follow me to stay on top of all things Chicago Pizza. Did I mention I run a Chicago Pizza Tour company? www.chicagopizzatours.com